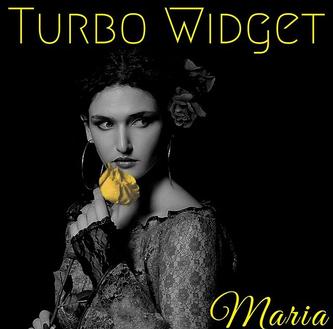 
Known for being able to draw listeners into their world through a deep and hypnotic sound reminiscent of The Doors & Led Zeppelin, husband and wife band Turbo Widget has steadily built a loyal and growing independent following. 2019 will see the release of a new song and video each month, to help carry the message even further.  The first 2019 release “Maria” will be available on January 18th across all of the major streaming services, with its companion video, a very artful expression of the song and band's vision, sure to be raising even more interest on YouTube.


“We feel like we were born for Turbo Widget it has just come together so naturally with neither of us having any prior musical experience and our performing for just five years,”  commented Ben Hanvy, one half of the St. Louis-based band with his wife Kim. “It's an exciting challenge we have laid out for ourselves for 2019 and we think fans are really going to enjoy hearing something fresh from us every month.”


All of this follows up on their very well received debut release, Turbo Widget's self-produced EP “First Light”, which has won praise for both their mix of mesmerizing melodies, blues and psychedelic rock rifts with quite socially conscious lyrics, dealing with real issues faced by people and individuals today.


Expect the creative sound and lyrics on 2019's releases, starting with “Maria”, to show even more growth from Turbo Widget as their ability to express themselves continues to grow with their experience as musicians.  “Maria” emphasizes an acoustic, almost-Euro Italian film track-like sound, highlighted by Ben's soulful vocals of love lost; displaying Turbo Widget's undeniable ability from a, perhaps, unexpected angle.


For more information be sure to visit http://www.turbowidget.com.  Check them out on Spotify, and stay part of the conversation and caught up-to-date with their new releases on Facebook and Instagram.


One thing is certain for many fans of independent music, the Atomic Soul Rock of Turbo Widget is not to be missed.